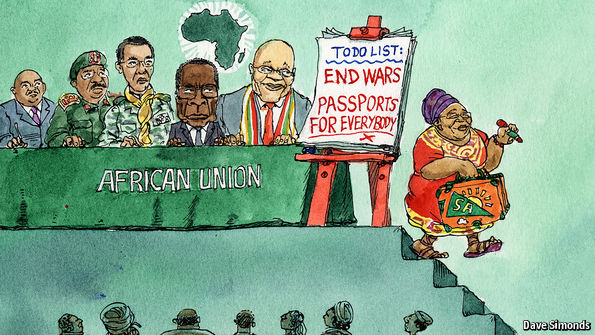 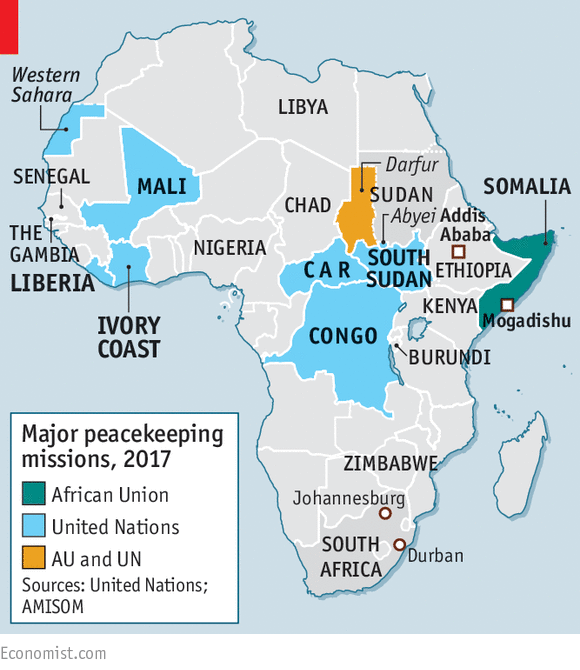 Her record in government was controversial: as health minister she promoted the use of a toxic industrial solvent as a miracle cure for AIDS, and then purged regulators when they told her that human trials would be unethical. However, as home-affairs minister, she was credited with making her ministry less corrupt and inept. So many thought she would get things done at the AU. For the most part, they were disappointed. “Her heart isn’t in it,” says one observer. “Someone who was more invested might have done more.”
Her flagship policy, known as Agenda 2063, is a mishmash of proposals. Some are unambitious; others, implausible. Within 50 years, the document declares, Africans will grow more, earn more and eat more. (This is a safe bet, but in the unlikely event that it does not come to pass, Ms Dlamini-Zuma will not be around to take the blame.) A few paragraphs later it promises African passports and visa-free travel for all Africans by 2018. Governments will have to hurry to meet this goal. So far, only presidents and officials can get pan-African passports. They are so rare that even Ms Dlamini-Zuma struggles to convince border guards that hers is real. The document also aims to end all wars in Africa by 2020. How, it does not say.
It is by no means all Ms Dlamini-Zuma’s fault that the AU is so ineffective. It is a club that welcomes autocrats and democrats alike. The only leaders it ostracises are those who seize power in a coup or who ignore the results of an election too blatantly, as recently happened in Gambia. Those who merely rig the polls are welcomed. The AU’s current chairman, a ceremonial but symbolically important figure chosen by the body’s assembly, is Idriss Déby, the oil-fuelled strongman of Chad. The previous one was Robert Mugabe, who has misruled Zimbabwe since 1980.
Yet even given these constraints, Ms Dlamini-Zuma has been a let-down. She has campaigned against sex discrimination, violence against women and for an end to child marriages. Yet for all her rhetoric, the AU has failed to grapple seriously with the crisis in South Sudan, where women and girls are gang-raped by soldiers. She seldom visits countries riven by conflict; for instance, she has yet to visit Somalia. When put to the test the AU has repeatedly failed to deploy peacekeepers to crisis zones. The notable exceptions are Darfur, where it was the first outfit to send peacekeepers, and Somalia, where an AU force has helped to push jihadists from the capital. A crisis in Burundi offered a chance for the AU to show its mettle. President Pierre Nkurunziza’s decision to seek an illicit third term ignited mass protests followed by a brutal, ethnically charged crackdown. The AU said it would send peacekeepers to protect civilians. But when Mr Nkurunziza objected, it decided not to. A modest plan to send 100 observers is still on the starting blocks. The AU also promised, in July 2016, to send a force to South Sudan. It is nowhere to be seen.
The AU struggles to persuade member states to bankroll it. Some 70% of its budget comes from non-African donors such as the European Union. Ms Dlamini-Zuma tried to reduce the AU’s reliance on the West, appointing Donald Kaberuka, a former head of the African Development Bank, to find new sources of cash. His plan, to finance the organisation through a 0.2% levy on imports into African countries, is meant to start this month.
Ms Dlamini-Zuma is wary of foreigners who scold Africans about human rights. During her tenure the AU has considered a mass pullout from the International Criminal Court, which some members deem prejudiced because most of its targets have been African. Her alternative is the African Court of Justice and Human Rights, which the AU has barred from hearing cases against incumbent government heads and their senior officials.
Such deference to high office would doubtless please her ex-husband, who has been charged with 783 counts of corruption and fraud by South African prosecutors. (He denies wrongdoing.) Mr Zuma is expected to stand down as head of South Africa’s ruling party, the African National Congress, in December. Whoever succeeds him as party chief is likely to win the presidency at the next general election. Mr Zuma has used all his presidential powers to avoid standing trial and is no doubt keen to anoint a sympathetic successor.
On an unrelated subject he argues that it is time for the ANC to have a female president and that his ex-wife is the most qualified candidate. Ms Dlamini-Zuma has said little about her plans beyond blandly indicating that she would never refuse a request from the ANC to serve the party. Judging by her Durban speech, she would welcome such an opportunity.
… See full article
Posted by chris macrae at 6:46 AM